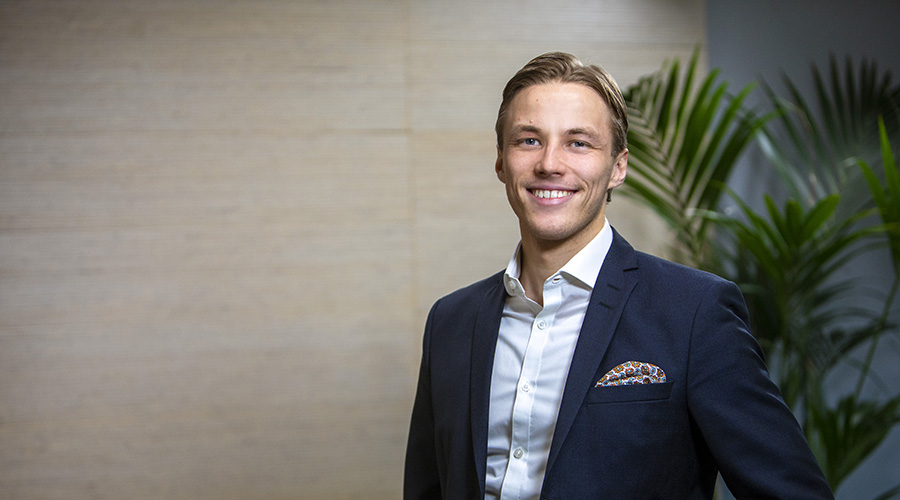 Lari Toppinen is the latest reinforcement in the MuniFin Funding and Sustainability team. He started on 10 January 2022. Together with the team, he is responsible for the pricing and execution of bond issuances on various markets around the world.

Lari Toppinen is one of four people working with funding in MuniFin. His tasks include issuing benchmarks, private placements, hedging and, dealer and investor relations. During his first weeks he has been involved with several transactions, as the team has already reached 30% of this year’s EUR 9–10 billion long-term funding target.

– I would say it has been an exciting start to the year and I quite enjoy the fast-paced environment. Everyone in the team is extremely professional and helpful and I am impressed how fast our team can adapt to new situations and market conditions. I look forward to collaborating more in the coming months, Toppinen says.

– Lari is a team player with good analytical skills, which are key factors in succeeding in this position. He is a great addition to the team and we all look forward to working together, says Antti Kontio, Head of Funding and Sustainability.

Before joining MuniFin, Toppinen gained experience from capital markets at Danske Bank. Currently, he is finishing his master’s degree at Hanken School of Economics.

Toppinen applied to MuniFin as he was intrigued by the company’s reputation as Finland’s most active bond issuer and pioneer status on sustainable finance. Being able to work in a global business environment is also a huge motivational factor for him.

– I always knew I wanted to work in an international role. I completed my bachelor’s degree at Stockholm University and before that I spent six months in Canada studying sustainable investing. I also studied for a year in Spain when I was younger. I hope the situation will soon allow us to travel and meet our dealer banks and investors in person, Toppinen says.

In his free time, he enjoys a variety of sports such as cross-country and downhill skiing, and golf. He likes to spend time with his friends and family and is a big fan of stand-up comedy.

– Ricky Gervais is probably the world’s greatest comedian. His character in The Office is one of my all-time favourites. A fun fact about me is that I enjoy performing and acting myself whenever there is a chance, Toppinen smiles.