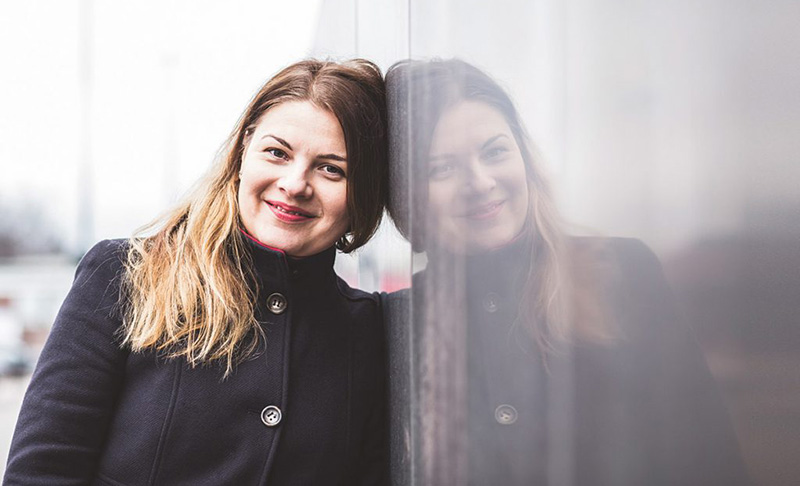 Environmental Director Saara Vauramo, PhD believes that a black-and-white approach is never the right one. Not even when it comes to the environment.

Saara Vauramo is an Environmental Director who believes firmly in efficient public transport. Even so, she occasionally takes her own car to make her life a little easier. She advocates domestic holidays but occasionally flies to far-away sunny beaches. Recycling is also second nature to Vauramo. But she sometimes accidentally throws a banana skin in the normal bin instead of the biodegradable waste container.

Some might say that she is a hypocrite. If you cannot live by your own standards, you cannot expect others to do so either.

But Vauramo is only human. As the Environmental Director of the City of Lahti, she puts a lot of emphasis on setting an example. For the same reason, she openly admits that she does not always do everything right herself. Sometimes she simply has to drive in order not to miss an appointment.

“Sanctimony and pedantry are not the way to sustainable solutions – being human is.”

On the whole, however, Vauramo leads a relatively eco-friendly lifestyle, and she is not alone: environmental friendliness is a natural part of the day-to-day life of many people in Lahti.

Vauramo explains that the city’s strategic goal is to be the most environmentally friendly city in Finland.

“The conditions for an ecological way of life are excellent in Lahti. The city has been promoting environmentalism for a long time, and we are now reaping tangible benefits from our efforts.”

Vauramo mentions the restoration of Lake Vesijärvi as a good example of a project that is now benefiting every resident in Lahti. Lake Vesijärvi has been one of the city’s most important environmental priorities since the 1960s. It is still among the most studied lakes in the world.

“In the 1950s, 60s and 70s, many local residents did not even think of the city as being by a lake, as Vesijärvi was just a smelly pool of sludge. Long-term ecological restoration efforts, active research and cooperation between local residents and businesses have given Lake Vesijärvi back to the community.”

At the moment, the number one priority in respect of water is urban runoff management, but the City of Lahti is also investing heavily in mobility. Vauramo explains excitedly how the city is pursuing better mobility solutions with the help of a unique, EU-funded experiment involving a citizens’ cap-and-trade scheme. The scheme allows local residents to trade their emissions from transport and convert their “savings” into cheaper bus tickets or bicycle repairs, for example.

“This is the first time anywhere in the world that citizens have been given such a tangible opportunity to contribute to greenhouse gas emissions trading, which many people see as something far removed from them personally”, she says.

Vauramo sees international relations and networking as crucial elements of modern environmentalism. With increasingly easy communication, it makes sense to share thoughts and ideas with people all over the planet. Extensive cooperation with both residents and businesses is important.

“We all need to be concerned about the environment. That is why we need to talk about our ideas and share them. Today’s pioneers need networks and also the ability to rejoice when others succeed”, she says.

Meaningful work in a place to call home

The main reason why environmental issues are so high on the agenda in Lahti can be traced back to the establishment of a satellite campus of the University of Helsinki in the city. The City of Lahti itself also has a long history as a pioneer in environmentalism.

Lahti first became a part of Vauramo’s life at the end of the 1990s, when she began to study ecology there. It was not love at first sight, and moving back to Helsinki felt like the right choice for Vauramo when she graduated. A few years later, however, she was back for a post-graduate degree.

“And now this is where I love to live. I grew up in a suburb of Vantaa, but I have finally found a place to call home”, she says.

After her time at university, Vauramo went to work for the City of Lahti, first as a Development Manager and then, as of two years ago, as Environmental Director. She sees her professional role as that of a motivator who encourages others to explore new ideas boldly and open-mindedly.

Vauramo is passionate about environmentalism. Global environmental challenges are what drives her and makes her work meaningful. She also finds her work stimulating enough to put her whole heart into it: there was a period some time ago when she finished her PhD, was involved in politics, worked as a Development Manager for the City of Lahti and led the Lahti Green City project, all in the space of a few years. Her toddler-age twins completed the challenging yet rewarding period of her life.

Despite the stress and the hectic lifestyle of those years, Vauramo would not change them for the world.

“Without my experience in politics, it would have been much more difficult for me to get to grips with the business logic of public administration and the decision-making process. I have, however, wondered afterwards how I survived those years”, she says.

Vauramo fell in love with nature as a little girl. She has vivid memories of blueberry picking during visits to her father’s hometown in eastern Finland.

“It was just me, the forest, blueberries and my father. Those memories run deep.”

At some point during her adolescent years, she also became interested in environmentalism. Vauramo is thankful for her family’s modest and non-consumerist lifestyle and deep and meaningful dinner-table conversations that taught her to look beyond the individual and think globally.

She has also taught her environmental values to her own children. Her children know what waste goes in which bin and not to rely on their mother to drive them to school. They make their own way to school, on foot or on bicycles.

And Vauramo’s favourite place in the world – the forest – now also has a place in her children’s hearts. The forest is a place where anyone, regardless of age, can forget about stress and deadlines for a little while.

“I am hoping that the serenity of blueberry forests also infects my children with the same passion for nature that I learned through my father”, Vauramo says.

Saara Vauramo chairs MuniFin’s Green Evaluation Team. She likes being part of the team, as her involvement gives her a good idea about the progress that different towns and municipalities around Finland are making in respect of environmental issues.

The Green Evaluation Team is an independent body comprised of experts from outside the MuniFin organisation. The team evaluates all projects that MuniFin has chosen as potential investments. The projects are graded and compared against the highest-scoring similar projects.

“With constant new developments and increasingly strict legal requirements, the Green Evaluation Team also needs to set the bar higher and higher all the time. Projects in the green portfolio are given points to determine a margin discount according to how environmentally friendly they are in the team’s opinion”, Vauramo explains.

She wants people to remember that green bonds are also good for the project coordinators’ public image.

Examples of projects in and around Lahti that have benefited from green bonds include Lahden Talot Oy’s almost-zero-energy housing developments. These were the first housing projects financed through the green bonds scheme. Vauramo disqualifies herself from evaluations that concern projects in the Lahti area.

City of Lahti shortlisted for the European Green Capital Award

Lahti’s long-term environmental efforts have not gone unnoticed. The city has been shortlisted as one of the finalists in the European Green Capital competition two years in a row.