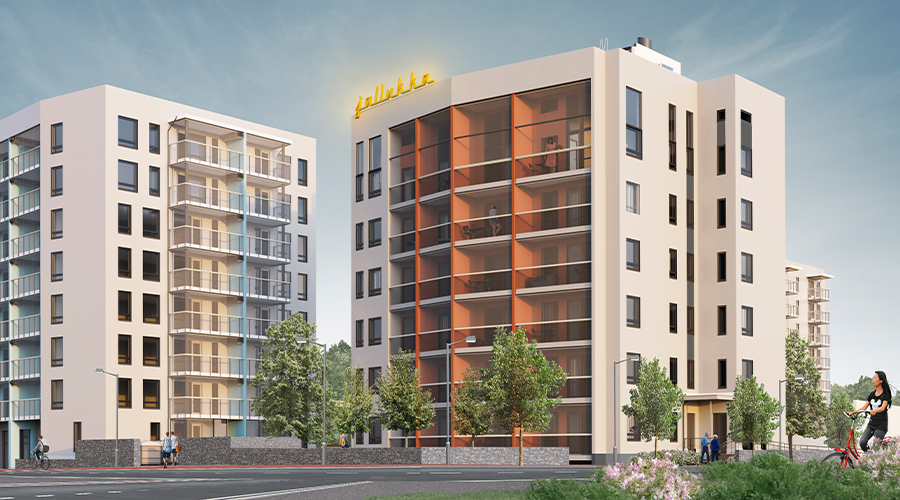 The Jallukka building in Tampere combines the needs of performing artists, a like-minded community and energy-efficient housing.

In early summer, a group of lucky performing artists and other professionals in the industry will move to a building designed for them in the Kaleva district in Tampere. Situated right next to the new tramway line, the building is a collaboration between the Live Music Foundation ELMU and M2‑Kodit, a company owned by the Y‑Foundation Group offering affordable state-subsidised rental housing.

In 2015, the two foundations found that they share similar values, and 2017 saw the completion of their first collaboration project, the Jallukka building in Helsinki. In Jallukka Helsinki, some of the apartments are earmarked for musicians, and some are regular rental apartments that are rented out by M2‑Kodit. In Tampere, the Jallukka building only inhabits music industry and performing arts professionals.

“Tampere is an important music and theatre city, but it doesn’t have an artist house. This made it a natural choice for the second Jallukka”, explains ELMU’s chair Juha Tynkkynen.

The choice of location was spurred by the Tampere Tramway, which will start operating this year and make the city more interconnected. But luck also played a role.

“The MAL agreement on land use, housing and transport stipulates that 30% of the housing production in Tampere must be state-subsidised. We won a plot with a great location and the project moved forward quickly”, says Pekka Kampman, development director at the Y‑Foundation.

A convenient location with good connections is important for musicians and performing artists who often work late at night.

“The Tullikamari concert and events venue is within crawling distance”, jokes Tynkkynen.

Jallukka Tampere has 39 apartments in total. Of these, 17 are earmarked for music industry professionals, and their tenants are chosen by the ELMU foundation. The remaining 22 apartments are earmarked for other performing artists, and they are administered by the Y‑Foundation’s company M2‑Kodit, which also chooses the tenants to these apartments. The demand is great.

“We received about 250 applications for the M2‑Kodit rental apartments”, says Kari Komu, CFO at the Y‑Foundation.

Based on the experiences of the Jallukka building in Helsinki, Jallukka Tampere will also have soundproof band rehearsal spaces and other shared facilities, such as club rooms and saunas. Each apartment has its own storeroom, but residents can also rent out storage spaces for their instruments. Although these special facilities bring extra costs, they are considered important.

“Performing artists appreciate having a studio outside their home, but one that they can access by elevator, for example in their slippers. This is why we wanted to include rehearsal spaces in the building, although we had to cover the costs ourselves”, explain Kampman and Tynkkynen.

The apartments themselves are regular rental apartments and fairly small in size. Sleeping lofts provide extra space in top-floor apartments, which are particularly sought after among artists with families.

“Our strategy states that in new construction, we build energy class A residential properties that are implemented with a high level of material efficiency”, Kampman says.

Jallukka Tampere also represents energy efficiency class A, and it has been financed with MuniFin’s green finance.

“Green finance offers us an interest benefit of a few basis points. This difference may not seem significant at an annual level, but over long loan periods, green finance actually saves us hundreds of thousands”, explains Komu.

Savings are also achieved through AI-controlled heat regulation, which anticipates peaks in heating and keeps indoor air in the apartments at an optimal level.

“The apartments have sensors for monitoring temperature and other indoor air conditions. Based on the data, AI finds the most energy-efficient solution to heating. Thanks to this smart solution, we have already been able to bring our annual heating costs down by 5–10% in our other buildings”, Komu says.

The Y‑Foundation owns more than 17,300 rental apartments in over 50 cities across Finland, so this reduction translates to significant savings.

The Y‑Foundation is also committed to improving the energy efficiency of its existing properties by making renovations and upgrades focused on energy consumption and by increasing the use of renewable energy in heating.

“In the future, we will focus heavily on recycling construction materials. Our goal is to increase the recovery rate of non-hazardous construction and demolition waste”, explains Kampman.

The Y‑Foundation’s sustainable ideology is also seen in how the foundation encourages its tenants to adopt low carbon means of transport. Jallukka Tampere does not have parking spaces for all tenants, but residents have access to a communal car or van that they can hire. The building also has a designated room for servicing and maintaining bicycles, just like Jallukka Helsinki does.

“We are offering residents carsharing in Jallukka Tampere for the first time, but we will offer this option in our other new properties in the future”, promises Kampman.

Jallukka Helsinki has received praise for the restaurant and bar that operates on the bottom floor of the building and offers residents an easy place to meet. In Jallukka Tampere, a spacious club room on the first floor will serve as a convenient meeting place.

“People value a sense of community. The residents of Jallukka Helsinki have organised barbeques together and also with other residents in the quarter. However, the building also offers peace and quiet for those that prefer it”, says Tynkkynen.

Inspired by the Jallukka buildings, the Y‑Foundation will start to include lobbies and club rooms in its other new buildings as well. According to Kampman, the use of shared sauna facilities is on the decrease, as the hopes and wants of residents are shifting.

“Our role is to offer facilities for communal activities. We are also planning to include completely novel and innovative shared spaces in our buildings, such as remote work facilities and a small apartment that residents can book for their short-term visitors.”

What about the ELMU foundation’s plans: will there be more Jallukka buildings?

“The demand seems great, especially in the Helsinki region. We are a small foundation with limited resources, so we’ll take one Jallukka at a time”, muses Tynkkynen.