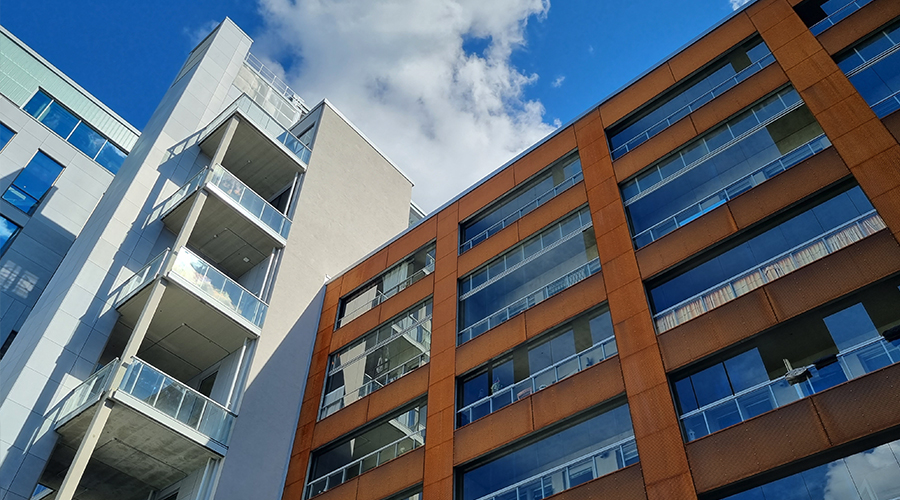 The International Social Housing Festival (ISHF) of 2022 was held in Helsinki from 14 to 17 of June. The event brought together policymakers, experts and planners across the world who share an interest in solving questions related to communal and sustainable housing and living in modern cities.

The ISHF festival was organized this year by ARA, City of Helsinki and Housing Europe. Municipality Finance is the biggest single financer of government-supported housing in Finland and one of the festival’s partner organisations. We joined a walking tour where expert guests visited several housing sites in Jätkäsaari that support communal, ecologic living.

After the tour, we interviewed a couple of international guests: Anne-Jo Visser is the Director of the Amsterdam Federation of Social Housing Association, and Jasper Brus is an urban planner at the Municipality of Hilversum.

What brought you to Helsinki and the ISHF festival?

Visser: I wanted to see the Finnish system: I had not previously visited Finland was curious to see, how social housing works here. Meeting people is also an important part of my visit. I organized with my colleagues four workshops where we got to share what we’ve learned with other experts.

Brus: Hilversum wants to join the discussion about what social housing is these days and how it will develop. We are the largest garden city of the Netherlands and our thinking is guided by garden city, such as human scale, sustainable and healthy living environments and cooperative spaces and resources. We’re very interested in how to build affordable government-supported housing that can also meet these values.

Today, we toured Jätkäsaari and visited some housing sites. What were your impressions of these sites?

Visser: First of all, everything is very clean! The building is high-quality and I also noticed some interesting innovations, such as the garbage disposal systems of the buildings. What also impressed me was the number of different groups of people. In the Netherlands, we also try to have people from different social groups living in the same areas, but here they also live in the same buildings. I also liked the amount of shared spaces in the sites. We might have a shared laundry room and communal space in a building in the Netherlands; here I also saw shared music rooms, crafts rooms, saunas.

Brus: The solutions I saw in Jätkäsaari are quite interesting from the garden city perspective: there were a lot of green spaces placed surrounded by the houses, and there were a lot of publicly accessible courtyards, which is quite unusual in the Netherlands. The amount of shared spaces was also new. In the Netherlands, housing is more individualistic: we meet our neighbours on the street and out on town, not so much in our hallways and common rooms.

Jätkäsaari has traditionally been a harbour part of the city; when it comes to housing, this area is fairly new. What kind of impression did the area leave on you?

Visser: I liked quite a lot the work that has been done on the green spaces of the area. In one site, we visited the top floor. Seeing the area from up high, it was even quite surprising to realise how much of built city environments there is around us: on the street level, the areas feel very green. What also impressed me was the sustainable building with much isolation and mixed housing of the new neighborhood.

Brus: In Hilversum, we are currently reworking a former business area to have more housing: the way Jätkäsaari has changed reminded me of this process a lot. In the Netherlands, we tend to keep some of the old buildings and solutions as part of the area when renewing it so that the area receives a certain identity. Here the starting point has been to build a great deal of new things. When I look all around me, everything looks contemporary. The public transport works well between here and the city center, so there’s no lack of parking space. The area feels very pedestrian-friendly. It’s great to notice how many streets are first and foremost aimed for pedestrians and to be used as a social space, not the domain of private cars.

The number of homeless people in Finland has decreased continuously over the past three decades, and the country plans to eradicate homelessness altogether within two government terms. MuniFin is the most significant financier of social housing in Finland.