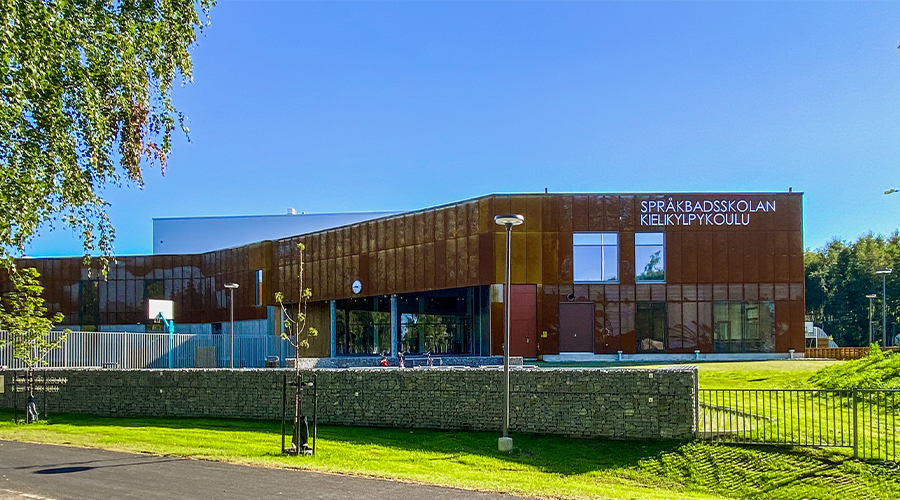 At the Language Immersion School in Jakobstad, almost all spaces are designed for teaching: the stairway doubles as an auditorium, the hallways as classrooms. Open learning environments like this take some getting used to, but schools must keep up with the times, says principal Kristiina Hellstrand.

In the autumn of 2020, after eight years of waiting, the Jakobstad Language Immersion School moved into new premises. The old building was abandoned due to indoor air problems, and the temporary premises also had some issues with air quality. The relocation process was long but well worth the wait, as the new building meets the demands of the developments that have taken place in teaching methods in the past eight years. The Language Immersion School now offers a taste of the future of education.

“Special attention has been paid to ventilation, acoustics and space design. The new building is really beautiful and cosy”, Hellstrand notes happily.

Classes in the second official language

With about 400 pupils, the Language Immersion School is the largest primary school in Jakobstad. In the bilingual town of Jakobstad, language immersion means that pupils who speak Finnish as their first language study in Finland’s second official language, Swedish, and vice versa. At the beginning of their school journey, pupils study exclusively in their second language, with the role of the first language increasing during the following years. The school follows the national curriculum: the only difference is the language.

The city has offered language immersion education since 1993. The concept landed in Finland a few years earlier from Canada, and Hellstrand was immediately inspired by it.

“When the city was looking for its first language immersion teachers, I signed up right away. That was almost 30 years ago, and I’m still happy with my decision.”

In 2003, the city founded a dedicated language immersion school, which is still one of a kind in Finland. Hellstrand has been the school’s principal from day one.

“At first, the Swedish-speaking kids were in one school and the Finnish-speaking kids in another. I cycled between the two schools, feeling like I was a language immersion school on wheels”, Hellstrand says with a chuckle.

Later on, mainstream education pupils were relocated to other primary schools, and the language immersion groups moved under one roof. The Language Immersion School has since operated in a hundred-year-old school building, in an old secondary school and in the premises of a business school, before finally moving into its own purpose-built facilities.

No school desks, no classrooms

The new building is impressive. Large windows let light in to spacious lobbies, and the hallways are decorated with pleasant earthy colours, soft surfaces and green elements. On the outside, the building’s most striking quality is its exterior wall material, which is taking on the colour of rust. But there’s no need to worry, assures Jan Levander, director of education and culture in Jakobstad.

“It will take about two years for the walls to get their final pigment, so I shouldn’t pass my judgment yet. But I think it already looks nice.”

The irregularly shaped two-storey building has been carefully designed. As part of the planning process, Levander and Hellstrand took part in the Nova Schola programme by the Finnish Consulting Group, in which participants got to know new types of learning environments all over Finland. The city’s construction manager and the school project’s lead architect also participated.

Hellstrand says that they visited five or six schools during two years. “At the visits, we understood how important acoustics are. Many think that open school spaces as restless and noisy, but with the right materials and good design, they’re anything but”, she remarks.

Inspiration from the tour shows in the Language Immersion School, which is Jakobstad’s first open learning environment. The school does not have any traditional classrooms. Instead, all learning spaces are used for teaching as needed. Some rooms have movable walls and curtains to divide the space. All parts of the building are designed for educational use: even the staircase can serve as an auditorium.

“The staircase has a high-quality sound system, a large screen and room for a large number of pupils”, says Levander.

According to Hellstrand, children have been quick to adopt the open environment, but the teachers have needed more time to adjust. There are no school desks: pupils sit on couches, around larger tables or on chairs – and sometimes on the floor.

“For us teachers, it takes some getting used to if a pupil is spinning on a chair or sitting on the floor. It can feel like the situation is not fully under our control. But if the pupils say it makes it easier for them to concentrate, does it make sense to force them to sit still? After all, adults are also allowed to move when we are attending a lecture or a presentation”, Hellstrand explains.

A series of large projects financed with real estate leasing

The school network in Jakobstad is undergoing major changes. After the Language Immersion School, the Oxhamn School, a Swedish-language secondary school, will be the next to have new facilities. A new primary school is also being planned, pending the municipal council’s decision.

“After these projects, the school network should be set for at least ten years”, Levander observes.

The Language Immersion School, the Oxhamn School and the day-care centre Alma, which was completed in 2020 and serves almost 200 children, are all financed with MuniFin’s real estate leasing.

“Leasing is a flexible option for large projects. Population is currently declining in Jakobstad, making it difficult to estimate what the value of these properties will be after 15 or 20 years. Leasing gives us more security in this regard”, Levander continues.

The concept of a classroom has remained virtually unchanged for a long time. But according to Hellstrand, schools must keep up with the times. New ways of learning require new learning environments.

“After all, we are preparing children for the future, not for the past”, she concludes.