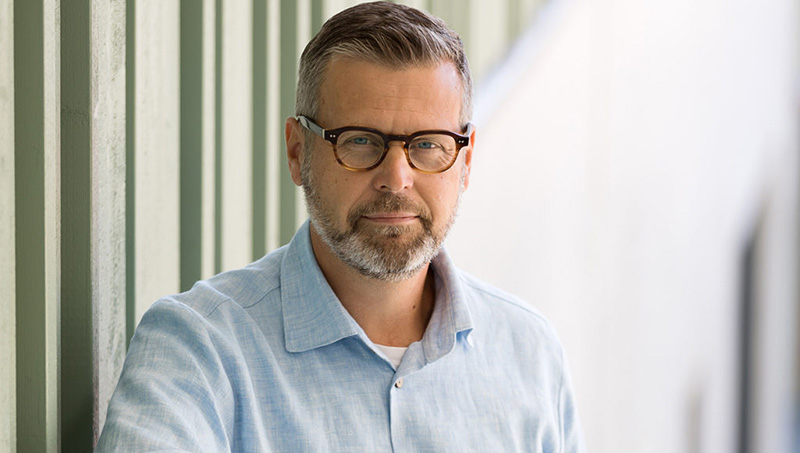 In the city of Joensuu, new schools and nurseries are being built with ecological principles and green technology. The new policy has already proven effective in reducing the city’s substantial maintenance backlog and improving user experience. According to the City of Joensuu’s Head of Facilities Management Timo Korhonen, there is no going back to the old approach to construction.

It was all happening in Nepenmäki School in August, just before the start of the school year. The newly completed school building had to be kitted out before the big day. The school’s brand-new library was also a hive of activity, as staff scrambled to stack the shelves with books. The City of Joensuu’s Head of Facilities Management Timo Korhonen dealt out high-fives and cheered the staff on.

“The opening of the new school was an exhilarating moment for both teachers and pupils. It was also exciting for me personally, as my son goes to Nepenmäki School”, Korhonen says.

However, Korhonen knew that everything would go as it should. Nepenmäki School is an example of the City of Joensuu’s new ecological building policy in action. The teachers were invited to co-design the new school with the construction company.

The aim was to make the building as environmentally friendly as possible, and this meant, among other things, installing solar panels on the roof, using high-quality materials and equipping the school with dozens of sensors that monitor everything from indoor air quality to water consumption.

Green construction is nothing new in Joensuu. The city, which is the capital of the heavily forested region of North Karelia, is known as the Forest Capital of Europe. As much as 80% of the area of the City of Joensuu is forest. Forestry research has been an integral part of the curriculum of the University of Joensuu – or the Joensuu campus of the University of Eastern Finland, as the institution is now known – since the beginning. Joensuu is also home to the headquarters of the European Forest Institute (EFI) and a wide range of forestry, wood and bioeconomy businesses.

“People in Joensuu have always had a close relationship with nature. The world is changing rapidly, and environmental issues are becoming more and more important to everyone. The City of Joensuu wants to stay on trend”, Korhonen says.

The city has adopted a new strategy that aims to incorporate environmentalism into every aspect of Joensuu’s development. The city’s ambitious goals include becoming the most carbon-neutral city in Europe and cutting greenhouse gas emissions by 60% from 2017 levels by 2025. The city is also planning to completely eradicate oil-based heating from public buildings by 2030.

“We did not win, but just being shortlisted for the award was an important boost to Joensuu’s image. I believe that a green image will help us to attract both new businesses and residents to the city”, Korhonen says.

Reining in the maintenance backlog

Korhonen has an MSc (Technology) degree and an MSc (Economics and Business Administration) degree from the University of Oulu, and his previous employers include Jaakko Pöyry and the Parliament of Finland. He took over as Head of the City of Joensuu’s Facilities Management a decade ago.

Korhonen spent his first years in Joensuu renovating old listed buildings. After a while, a new approach began to take shape. Korhonen realised that, instead of trying to fix many of the old buildings, such as schools and nurseries with indoor air quality issues, it would make a lot more sense financially, operationally and in terms of risks to replace them completely.

Korhonen believes that, in the choice between renovation and new development, a long-term perspective is crucial. Old buildings often have multiple issues, and fixing just one is rarely enough. In such cases, starting from scratch can be a much better option, as the new building can be designed to be both energy-efficient in terms of materials and ideal in terms of the use of space. The same cannot always be said for old buildings.

“The initial investment may be a little bigger, but the savings that can be achieved with green construction over the life-cycle of a building are considerable. The biggest beneficiaries are local residents, who ultimately pay for the buildings through tax”, Korhonen says.

Korhonen does not want to entertain hindsight when it comes to the problems with Joensuu’s old buildings. He sees the city’s old buildings as products of their time and believes that they were built according to the best know-how available at the time. Our understanding of construction technology and materials has come a long way since then. Today, buildings are designed to last for between 30 and 35 years. That is the period that they should be able to serve their users without problems.

“The city sets the course for public-sector construction. I have actually wondered whether we should be designing buildings with a life-cycle of just 20 years, considering how fast the world is changing. What makes sense today might become redundant in the future. This can already be seen in office work, which is no longer tied to a specific workstation or room. Will we even need large offices in the future?” Korhonen ponders.

Adopting a more environmentally friendly construction policy has ultimately been easy in Joensuu, as the financial benefits are undeniable.

“The city’s administrators and decision-makers now understand that it makes sense to look at the entire life-cycle of an investment and not just how much it costs to build.

Expertly pitched and well-reasoned plans are obviously important. The City of Joensuu now recognises that new development is often the smartest option and that it is not worth renovating buildings dating back to the 1960s and 1970s. There is no going back to the old way of thinking”, Korhonen says.

Modern schools no longer go by the dogma that teachers talk and the pupils listen. Today, the focus is on teamwork between teachers and on pupils working in groups and learning through their own curiosity. These principles are set out in the Finnish National Agency for Education’s new national core curriculum for basic education, which was introduced in 2014.

“Old school buildings are ill-suited to the new methods of teaching and learning. Schools today need flexible facilities. Our new building, which we have now been using for two years, was designed to meet the challenges of the new national curriculum”, explains Karhunmäki School’s Head Teacher Timo Nykänen.

Nykänen is visibly pleased with how well the new building serves its users.

“The teachers were involved in the design process from the start, which turned out to be a good solution”, Nykänen says.

The City of Joensuu built Karhunmäki School using the so-called turnkey contract model, which involves choosing the contractor on the basis of points awarded to each bidder’s proposal. Nykänen represented the users of the school in a project planning group charged with the planning process. According to Nykänen, the aim was not to follow the hottest pedagogical trends of the moment but to look for solutions that would also work in the future.

“That meant, for example, introducing what we call “learning hubs”, which are four separate teaching areas that can also be combined simply by moving partition walls to make one big space. It is important for the building not to dictate how we teach. For us, the building is an enabler.”, Nykänen explains.

Karhunmäki School is one of the City of Joensuu’s green bond investments in which environmental friendliness is key. The performance of the building is monitored by means of a multitude of sensors. The data are also used in teaching.

“Designing a user interface that is simple enough for teachers to be able to incorporate all the data into their lessons has been challenging. We still have a way to go in that respect. Most of the building’s technical systems are automated, which is another challenge. It is difficult to motivate teachers and pupils to make environmentally friendly choices if they cannot, for example, control the temperature in the classroom themselves and experiment with different options”, Nykänen says.

Nykänen feels that the design of Karhunmäki School is a triumph.

“Everyone agrees that our school is a calm and peaceful place to work and study. It is great that the building itself can contribute to a relaxed atmosphere and promote learning”, Nykänen says.