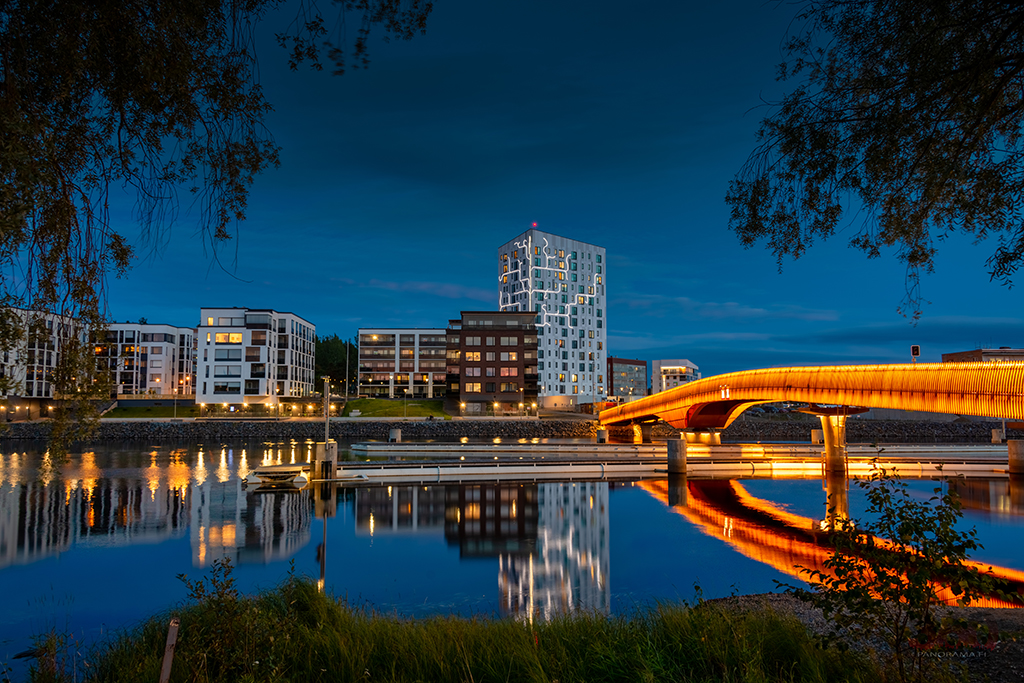 At 14 storeys and 50 metres tall, Lighthouse is both Finland’s tallest wooden apartment building and its tallest student residence. This building, with its 117 apartments, stands proudly on Joensuu’s Penttilänranta in the heart of Northern Karelia.

Lighthouse’s topping out ceremony was held at the cusp of spring in March 2019 and the first residents were able to move into their new homes at the end of August. The last apartment had been rented by the beginning of September.

“The whole process – obtaining permits, tendering out the contract, design, planning and construction – ended up taking about forty months,” says Jarmo Ojalainen, Managing Director of Joensuun Elli. Joensuun Elli is responsible for the city’s student housing and was the developer in this project. Although design and planning began back in 2016, actual construction was not launched for a couple of years.

He admits that the design phase was rather tough at times.

“Luckily, the foundation work and construction went smoothly and much more quickly. Things started to get easier as soon as we reached the second floor, and we managed to avoid any major adversity.”

Ojalainen says that the idea to build Finland’s tallest wooden building came from the City of Joensuu. Several districts already had important wooden buildings, but the City wanted one in the Penttilänranta residential area as well.

“As the City’s subsidiary, we wanted to demonstrate that wooden construction is a style with great potential. The plot already had a city plan that permitted construction up to a maximum height of fourteen storeys, so we had to make full use of those building rights,” he says.

The many benefits of wooden construction

While the wooden building was under construction in Penttilänranta, its structures were kept dry throughout the entire process. Working with wood is usually easier than working with concrete.

“Once a wooden frame has been completed, there’s no need to dry it as is often the case with a concrete frame. Conditions on the construction site were also more pleasant than they usually are in concrete construction,” says Jarmo Ojalainen.

He says that although wood is not vastly different to concrete in terms of livability, it does have one special advantage.

“Sound does not echo as much in a wooden house, which results in very pleasant acoustics.”

When it comes to costs, Ojalainen estimates that building a wooden building as a one-off investment costs about ten per cent more than a concrete one. He believes this will change in the future as construction methods evolve.

“Advancements will make wooden buildings more competitive, that is, the price level will certainly start to fall.”

All the essential wooden elements were obtained from Stora Enso. The wall elements are made of laminated veneer lumber (LVL) manufactured in Varkaus, while the intermediate floor elements are cross-laminated timber (CLT).

The building was already attracting plenty of attention during the construction phase. A couple of open doors events were arranged on the site.

“Almost five hundred people attended the second event over the space of three hours. The building seemed to be of interest even during the construction phase. The location is great – close to educational institutions, the city centre and the railway station – with the added bonus of really amazing views,” says Ojalainen.

Pinja Juurakko, who is studying to become a forestry engineer at Joensuu University of Applied Sciences, is a Lighthouse resident. Juurakko says that she loves her studio apartment.

“I was extremely surprised at how much I like living here. There have never been any problems. I fully intend to live here throughout my studies,” says Juurakko, who moved into the building in September.

She also confirms that living in a wooden house is acoustically pleasing.

“It’s really quiet – no echo. This is definitely one of the positive aspects of the place. Another is the residents, who are friendly and communicative even though they don’t know each other,” she says.