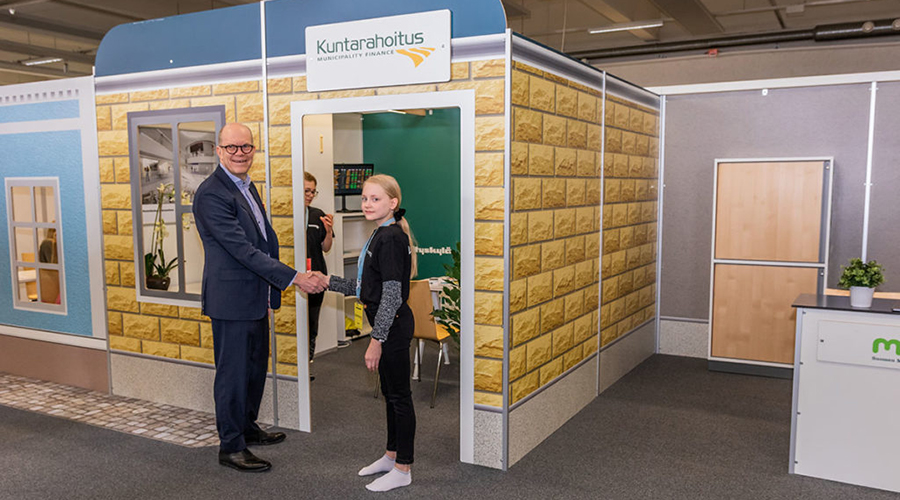 12-year-old Mona leads the Municipality Finance team in the business village Yrityskylä for 6th graders in the Helsinki district of Vanhakaupunki.

On this sunny Friday morning, the facilities of the Museum of Technology in Vanhakaupunki, Helsinki are filled with the buzz of conversation, laughter and excitement when dozens of 12-year-olds from various schools around the city gather together. After a while, the hum of voices dies down and the schoolchildren divide into small teams. The long-awaited working day in the Yrityskylä business village is about to start.

Yrityskylä is a society specifically for schoolchildren, reminiscent of a miniature town, where pupils have the opportunity to work in their chosen profession and role, and also to get paid for the work they do. Many socially significant brands and their miniature companies are represented in the museum’s premises, including Nordea, ABB, Helen,  Lidl, OP, Terveystalo, the K and S Groups, Martela, Fortum and UPM Kymmene. Walking along the corridor, you come to the Municipality Finance office, where a team of four are gradually starting their working day.

The President and CEO of the miniature MuniFin, 12-year-old Mona from Käpylä school, is carefully preparing for the tasks of the day, consisting of evaluations of customers’ investment projects and shared meetings and reviews. She gets through her tasks using a tablet – the entire learning environment is digital and gamified. Mona’s team includes Responsibility Manager Aslak, Account Manager Aleksi and Financing Manager Emil.

In Yrityskylä, the students act as employees, citizens and consumers and, after being paid, take responsibility also for their spending. On site, it is clear to see that each team is highly motivated and takes care to acquaint themselves with the tasks assigned to them.

“This is a tangible way to teach children skills they will be able to use in the future. More attention should be paid especially to financial skills right from the first few years of school,” says Tiina Solas, Partnership Manager at Yrityskylä.

This is a special day, especially for the young MuniFin employees, because today Mona will meet her colleague, the President and CEO of Municipality Finance, Esa Kallio, who will be visiting Yrityskylä.

“Yrityskylä is a brilliant idea. These are exactly the kinds of projects we need more of in today’s society, rather than cuts in education. Practical action is an important route to learning,” says Kallio.

Mona is a CEO with plenty of initiative and is happy to tell Kallio about her day. This meeting does not make the young leader nervous.

“I’ve had a lot of fun in the Yrityskylä and there have been no boring moments at all. Some things are quite difficult but not impossible, and you learn a lot from the tasks,” Mona says.

The work performed by Yrityskylä is nationally significant.

“In 2019, we are already reaching 75% of Finland’s sixth graders and 40% of ninth graders from nearly 200 municipalities. There are more than 100 partners involved,” Tiina Solas explains.

Piloted by Economy and youth TAT, Yrityskylä is a Finnish learning complex that has been recognised as the best educational innovation in the world. It is designed to provide sixth and ninth graders with positive experiences of the economy, working life and society. The entire operation is based on the curriculum of the Finnish National Agency for Education. Read more at: yrityskyla.fi