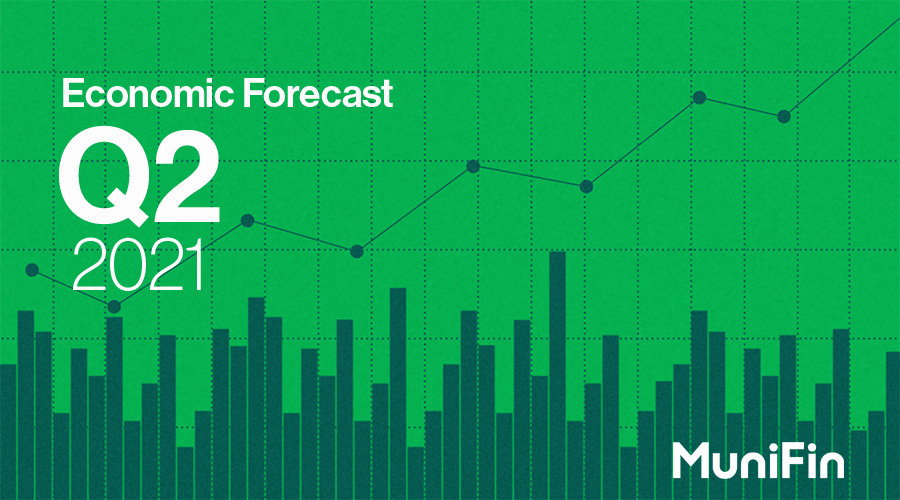 The Finnish economy dwindled in the first quarter, but with foreign trade picking up, vaccinations proceeding at a fast pace and courage to invest growing, growth prospects are also improving. As a result, MuniFin raised its forecast on this year’s GDP growth to 2.7%.

In the first quarter of the year, government restrictions and fear of the COVID-19 spreading suppressed private consumption. Foreign trade also took an ugly turn, with exports falling by roughly five per cent in the first quarter.

“The drop is nothing to worry about, because the decline is explained by the atypical comparison period in late 2020, when maritime transport drove exports up. The underlying trend in exports is one of growth, and exports will be one of the drivers of growth this year”, estimates MuniFin’s Chief Economist Timo Vesala.

Investments took an upward turn in early 2021. Companies are more confident about the future, reviving their production capacity to respond to the recovering demand.

Thanks to the revived courage to invest and the coronavirus vaccinations proceeding faster than expected, MuniFin is increasing its forecast of this year’s GDP growth from 2.3% to 2.7%. Next year’s growth prospects remain unchanged: in 2022, MuniFin expects Finland’s GDP to grow by 3.0%.

“It looks like economic growth accelerated soon after the lockdown period in early spring. Thanks to a boost in private consumption, mid-year is looking to become stronger than we previously expected”, shares Vesala.

Lack of skilled labour may put the brakes on growth

Finland’s labour market has recovered from the pandemic better than expected: unemployment reached its peak last autumn, and employment has recovered rather briskly ever since, apart from a brief hiatus in the winter. MuniFin’s estimate of this year’s average unemployment rate stands at 7.6%. The figure is expected to come down to 7.1% in 2022.

“The job market has clearly had better pull than we previously expected. People are even more active in the job market than they were before the pandemic”, notes Vesala.

A new economic boom is only starting, but the lack of skilled labour already threatens to limit growth. According to Vesala, skills shortage has furtively become one of the toughest structural problems Finland’s economy has to face.

“There is no quick fix to strengthening the skills base. Solving the labour market mismatch requires long-term investments in education and research. The intention behind raising the compulsory school age is well-meant, but in making the reform, we must ensure that municipalities and the new health and social services counties will have enough means to tackle social exclusion among the young.”

The asynchronous revival of supply and demand as well as the recovery of energy and raw material prices cause inflation rates to increase. In recent months, Finland’s inflation has risen above the euro area average, which may undermine competitiveness in the long term. In its economic forecast, MuniFin raised its estimate of this year’s inflation to 1.9%. MuniFin’s inflation estimate for 2022 remains at 1.7%.

Although the rise in inflation is expected to be temporary, the trends are hard to predict.

“Mass psychology and the expectations of different parties play a part in this. It is also not clear how effectively inflation could be slowed down if prices continue to rise and inflation expectations strengthen too much”, Vesala muses.

If the EU recovery policy proves successful, the ECB may be able to start normalising interest rates. According to Vesala’s estimate, the ECB might first start raising interests in 2023.

After the Constitutional Law Committee’s recent statement, the health and social services reform seems more likely to happen than ever before. The proposed reform’s immediate effects on municipal economy will be small, but the effects may cumulate in the long term.

“Having cost pressures transferred from municipalities to the new health and social services counties and the central government will benefit all municipalities, but the effect will be particularly significant in areas with net emigration, where health and social services form a very large part of net costs”, says Esa Kallio, President and CEO at MuniFin.

The proposed reform will have very different effects on the financing structure of municipalities’ operational economy depending on the region. Municipalities with a strong tax base will lose some of their tax revenue but receive income transfers from the state instead. In these municipalities, the growth prospects and the predictability of the income side  will decrease, possibly causing unexpected effects on the investment capacity of growing municipalities.

“The health and social services reform will eliminate proportionately more running operational costs than investment needs. Municipalities will have less control over maintaining a sufficient annual contribution margin in order to fund necessary investments. As the share of municipal tax revenue decreases, the investment capacity of the financially strongest municipalities may in fact be impaired in the long term”, Kallio points out.