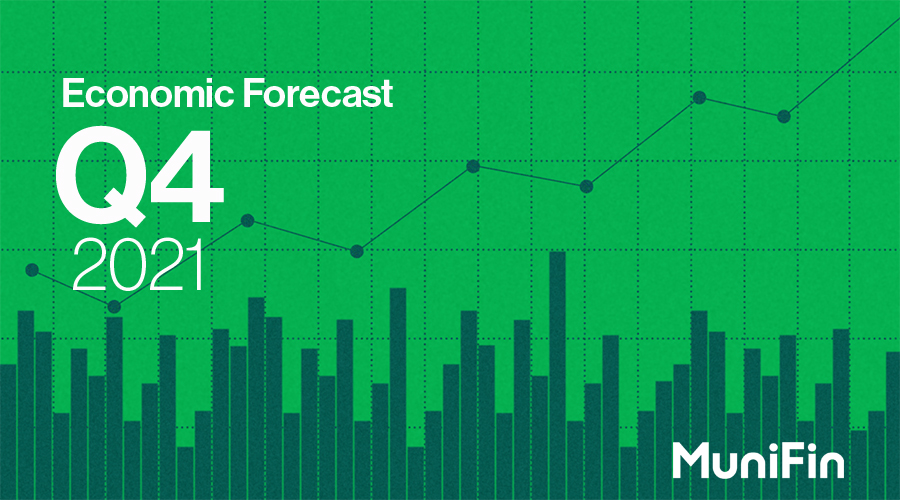 Although all the basic elements of growth still exist, the cyclical risks are growing. The Finnish economy is entering the new year in circumstances of slowing growth. As a result, MuniFin lowers its GDP growth forecast for 2022 to 2.6%.

MuniFin’s fourth and final economic forecast for this year comes out at an exceptional time, says MuniFin’s Chief Economist Timo Vesala. The world economy continues to grow, but short-term risks are on the rise. Omicron, the new coronavirus variant discovered in South Africa, is raising uncertainty to a new level. Because very little is yet known about how dangerous the new variant is, how easily it spreads and how effectively vaccines protect against it, it is difficult to estimate what impact it will have on the economy.

“Our forecast accounts for the recent aggravation of the COVID pandemic, but not for the potential effects of the new variant. If vaccine efficacy proves significantly lower for Omicron than for the other variants, tighter restrictions may have to be imposed. This would also mean that economic recovery will be knocked off track”, explains Vesala.

“If China’s economic growth slows down considerably, this will affect the world economy as well”, Vesala assesses.

The business environment is also hampered by the increase of costs. Rising inflation weakens the buying power of consumers and thus also takes its toll on economic activity.

By international comparison, Finland has so far survived the pandemic with only a moderate effect on the economy. Finland’s GDP exceeded the pre-pandemic level already in the second quarter of this year. Employment has also recovered briskly, with the total number of people in employment reaching an all-time high this year.

According to Vesala, the biggest problem in the Finnish economy is that its long-term growth path is not sufficient to sustain the current welfare state. Finland should gradually start shifting the focus back from COVID damage control to bold economic reform.

“We must create an outlook in which companies have ready access to human capital. Otherwise, our economy will struggle to attract growth investments. To succeed, we must invest in education, research and attracting foreign workers. We should also be in the vanguard of the green transition”, summarises Vesala.

Inflation has accelerated significantly in the autumn. The basic trends in monetary policy are the same in the United States and in Europe, but the central banks are moving at a different pace. The risk of the economy overheating is greater in the US.

“Unless the aggravating pandemic situation causes the short-term outlook to take a significant turn for the worse, the Fed is likely to raise its key interest rates as early as next year”, predicts Vesala.

Inflation uncertainty has also increased considerably in the euro area. Vesala nevertheless believes that the underlying factors, such as the spiking energy prices and disrupted supply chains, are mostly temporary.

“As the worst bottlenecks are being released, their price-increasing effects may be replaced by pressure to decrease prices, returning inflation below the ECB’s target level. The ECB’s new inflation target leaves the central bank more leeway to delay interest rate increases, and I think the ECB will use it.”

Vesala believes that the ECB will reduce its non-standard monetary policy measures in 2022. The time to gradually start normalising interest policy could be in late 2023.

Municipalities have enjoyed generous COVID support measures, which are now coming to an end

Almost all of the key indicators of municipal finances are now looking better than pre-pandemic forecasts expected. The central government has shouldered the main responsibility for mitigating the negative economic impact of the pandemic, ensuring that municipalities will not feel the pandemic pinch.

“After the reform, municipalities that can now rely on a growing tax income will become increasingly dependent on central government income transfers. And municipalities with a weakening tax base will increase their reliance on their own tax income. In both cases, a secure source of income is replaced by a more unreliable one.”

The health and social services reform also calls for the evaluation of the long-term prerequisites for growth. The level of education among young people is declining, and Finland has fallen below the OECD average in the percentage of tertiary graduates. Even after the social services reform is implemented, the provision of education will largely be the responsibility of municipalities. In many municipalities, a low birth rate is causing a shortage of pupils and pushing up the unit cost in education.

“With the health and social services reform halving municipalities duties and finances, there is a risk that education will take the hit and suffer the adjustments. Municipalities need more resources, but as of yet, it is unclear where these resources will come from”, Kallio says.