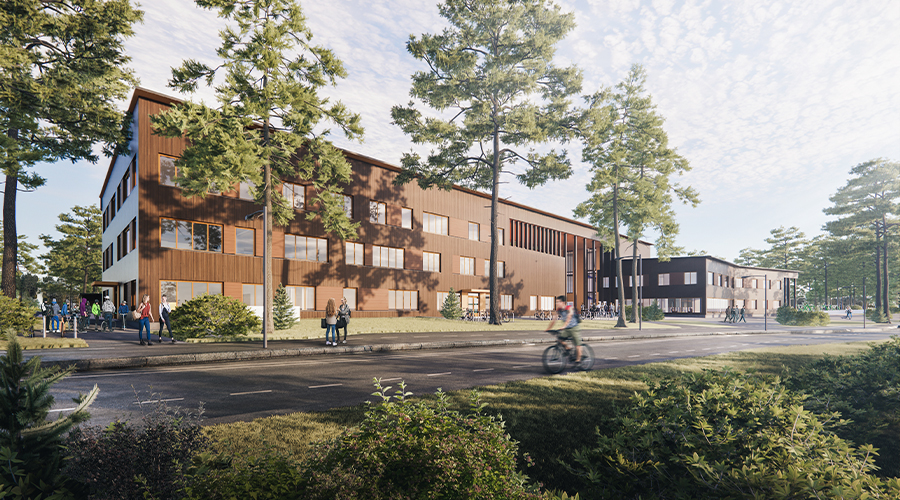 The construction of a new community centre will kick off a series of school-related projects in Valkeala, Finland. The community centre is one of the greenest of MuniFin’s projects to date and will serve residents of all ages.

“Eagerly anticipated”, sums up Risto Mikkola, planning manager at the City of Kouvola, describing the new community centre in the urban area of Valkeala, whose construction is set to begin in late summer. The comment is apt, considering that the project began in 2017, but had to be put on hold due to a school network reform in 2018.

The restructuring of the school network cut the number of schools in the area from 34 to 20. The old village schools are making room for new multi-purpose buildings that will also host day-care services, youth services, hobby clubs and local associations. The Valkeala community centre will be the first of these modern buildings.

“The building will rise on the main street, at the site of Valkeala’s old town hall. The community centre will become Valkeala’s new heart in many ways”, Mikkola predicts.

After the school network reform was settled, the work on the community centre has progressed on time – although without any visible construction, the design phase may have appeared slow to the local residents.

“Lots of work has been done, but so far there are no physical results to show for it. Now that we are about to enter the construction phase, the project will start feeling more tangible for the residents, too”, says Hellevi Kunnas, director of finance at the City of Kouvola.

In this project, the contractor is YIT Group. The contracts will be signed on 4 June, and the groundwork is set to begin late this summer.

The Valkeala community centre is funded with MuniFin’s green finance, and the project scored the highest ever points from the MuniFin Green Evaluation Team in the suistainable buildings category. Risto Mikkola confirms that there were no special tricks involved: the high score was the result of determined and systematic work.

“In the tendering phase, we emphasised quality and environmentally friendly solutions, which worked out well. We’re very happy and also a little surprised to have scored this well”, Mikkola notes happily.

MuniFin’s Green Evaluation Team praised the community centre project for its material choices, energy efficiency, renewable energy sources, high utilisation rate of services, and the exemplary treatment of stormwater. The building will mainly use district heating, which is produced locally in Kouvola with exceptionally low emissions.

Green values played an important role not just in the building’s environmental impact, but also in its design. In the tendering process, the city set clear criteria for the role nature should play at the community centre. For example, all plans included the possibility of backyard farming.

“Children should have a chance to dig their hands in the dirt, if only for health reasons. This has been one of our goals right from the start”, Mikkola emphasises.

The Valkeala community centre is by far the largest project the City of Kouvola has funded with lease financing and the first so called lifecycle project. The city has traditionally used its own funding and maintenance, but now wanted to try something new.

“We wanted to explore new alternatives because there are so many options available today. We have built some day‑care centres with lease financing before, and now we’ll get to test the lifecycle model in practice. It’s important not to get stuck doing things the same way”, explains Kunnas, the City of Kouvola director of finance.

Experience was also sought from outside the city, for example from the Heinsuo school in Hollola, where the lifecycle model has already proved successful. Another reference project is the Mansikkala school in Imatra, which is currently under construction. The purpose of visiting these schools with teachers was not only to learn about the lifecycle model, but also to hear opinions on what a modern learning environment should look like. After all, multi-purpose facilities are not without their challenges.

“When the curriculum was reformed in 2016, it swinged rather heavily in the direction of an open model. Soon after, it became clear that there cannot be too many groups working in the same space without the groups disturbing each other. Now we have taken a step back and combined the more separate and more open approaches”, Mikkola says.

The city and the service providers are currently drawing the big design lines for the community centre together with the teachers. Mikkola praises the lifecycle partner YIT for their model of participatory design.

“In May, before the summer holidays, we will make the major decisions that affect the building’s shape and yard functions. In the autumn, we will continue with details like the shelves and cabinets. YIT has provided a really good framework for this process.”

A small section of the old high school will be demolished in the summer to make room for the new 10,000-square-metre multi-purpose building. Excavation and piling work will begin towards the end of the summer, and foundations will be cast in the autumn.

The Valkeala community centre will kick off a series of large school projects in Kouvola. The next multi-purpose buildings are planned in Inkeroinen, with renovations planned for Kuusankoski and the Kouvola city centre as well. For local people, the school projects instil confidence in the vitality of their home region.

“Residents have had serious concerns about the future of this area. The community centre is an indication that we will continue to invest in Valkeala. The old town is gaining new vitality”, Kunnas summarises.