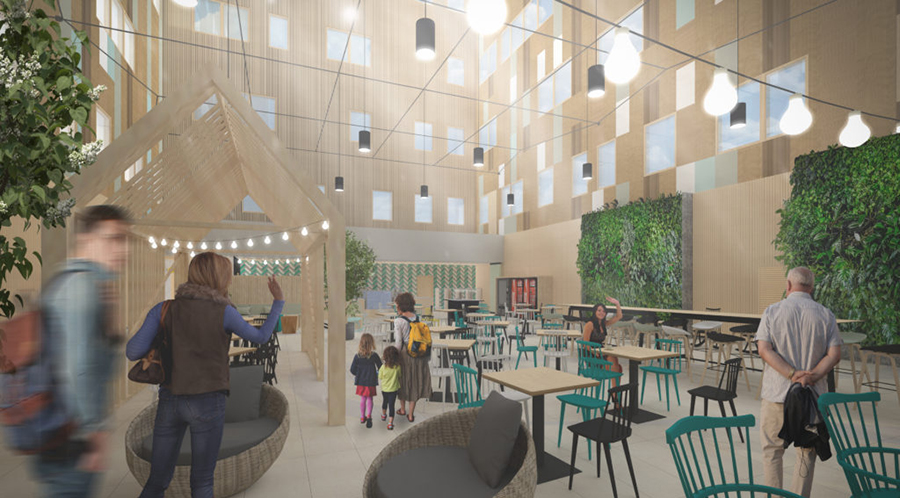 The large-scale contract of the Hospital District of Southwest Finland, the new T3 building of the Turku University Hospital, is progressing quickly. The building, which is being built over the railway and motorway, will join the various parts of the hospital into one functional whole. Constructed using Municipality Finance’s flexible real-estate leasing, the agile hospital will serve the residents of the region long into the future.

“Able withstand a train crash,” reported the public service broadcasting company Yle in June 2018. Eighteen months earlier, the tone of reporting had been quite different: errors had been discovered in the foundations and vertical structures of the hospital’s concrete deck which was designed to cross over the railway and motorway running from Helsinki to Turku. The concrete was too brittle, and its strength was not estimated to withstand the strain caused by a potential collision. Demolition and repair work was started immediately, but already almost 3,000 cubic metres of concrete of deficient strength had been set in place. This caused a substantial delay in the construction work.

“The dismantling and rebuilding of the structures already made will delay the completion by about ten months. The contractor is responsible for the costs of dismantling and rebuilding, but the delay will also cause significant expenses for the Hospital District. This is distressing, of course, but fortunately we were able to negotiate the costs and organise flexible funding,” said Project Director Timo Seppälä at the time.

Happily today there are good news about the construction site. The new concrete deck is strong enough and set in place, and the new hospital will be completed in the autumn of 2021. The new building will house some key functions of the dilapidated U Hospital, which was built in the 1960s. These functions include the treatment of children and adolescents; childbirth and gynaecology; ear, nose and throat, and medical support services, such as clinical neurophysiology and medical imaging.

The original project design for the new T3 building was approved in 2014. This large-scale project involves numerous partners. The project belongs to the Hospital District of Southwest Finland and is located on land owned by the City of Turku, while underneath the new hospital the railway lines and the Turku-Helsinki motorway serve travellers.

Three years ago, MuniFin joined the project as its financier. The T3 hospital is an extraordinary project not only because of its architecture, but also its funding. The Hospital District decided to finance it with flexible real-estate leasing.

“In the economy stabilisation programme launched in 2012, we committed ourselves to a maximum loan portfolio of MEUR 200 in our Hospital District. Due to our large investment programme, our debt-to-equity-ratio was already quite high. We wanted to reduce the price risk associated with refinancing, while keeping the financial model easily comparable to our own balance sheet financing. It was absolutely necessary to start the T3 hospital project, and that is why we chose the flexible real-estate leasing offered by Municipality Finance,” says Leena Setälä, the Hospital District’s Director of Strategy.

“In practice, we act as the financier and owner of the T3 Hospital. The Hospital District has selected the contractor responsible for the construction through competitive tendering and will lease the building from us with a leasing contract after its completion,” Department Director Kirsi Räbinä from MuniFin explains.

In a long-term construction project such as the T3 hospital, funding needs to be carefully considered from the point of view of its long-term effects. The newly updated price tag of the eight-storey new construction with a total area of about 55,000 square meters is approximately MEUR 190.

In the project plan, the project’s costs have been estimated according to the 2014 Tender Price Index. However, the cost level of construction at that time was completely different to what it will be in 2021, which is the time frame for the construction and financing of the T3 hospital. Due to the faster than anticipated rise of construction costs and the prolonged completion schedule resulting from the problem with the concrete, the project funding had to be reviewed, and a budget negotiation was held in the summer of 2017.

“We went through the costs of the project, the development of building cost indexes in the coming years and factors that had caused additional costs, such as the concrete problem. The flexible renegotiation of financing was a win in a difficult situation,” Setälä says.

The missing piece completes the whole

The Finnish hospital stock is at a stage where new constructional solutions are needed. New technical possibilities and needs require precise planning and some skill at predicting the future.

“The hospital must stand the test of time and be able to serve not only the current but also future needs of health care. Demographic factors, future illnesses and the functioning of the premises have been taken into account in the planning,” Setälä says.

The ambitious and impressive location of the new T3 hospital is more than the fruit of architectural passion. Located on top of high-speed transport connections, the hospital provides easy access from the outside, but also brings synergies within it. T3 forms a continuum with other parts of the hospital. The same courtyard houses Hospital A built in the 1930s and the facilities of the University of Turku’s Faculty of Medicine, also known as Medisiina D. The future campus area will enable, among others, close cooperation between teaching and research and sharing the facilities between students and the hospital.

“Whereas in the past the railway and motorway split the hospital area apart and separated the units, they now combine them into a functional whole,” explains Riikka Aaltonen, Project Director of Functional Design.

The starting point for the design were the synergies between the various functionalities.

“We are seeking operational reforms that will reduce, for example, the unnecessary movement of goods and people. The new connection will allow the operating theatres, among others, to function in the same building as one operating unit. This will benefit both patients and the staff,” Aaltonen continues.

Unification is an important point not only for functionality but also from the point of view of symbolism: T3 is the missing piece of the hospital area.

What does a hospital for a new kind of thinking look like?

There are three principles guiding the design of the hospital complex: the building must be healthy, safe and functional. In addition to this, the architects wanted to challenge people’s ideas of what a hospital looks and feels like. The objective was to create a hospital that is also visually beautiful and welcoming.

Architect Mikko Sinervo from the Architect Group Reino Koivula is in charge of the visual appearance of the hospital. The starting point of the design was the story that Sinervo created together with Matti Tainio, who is responsible for the acquisition of art within the hospital project.

This story is based on a typical Finnish archipelago landscape, where the hospital represents an island and the busy motorway underneath represents flowing water. The engine room to be built on the roof of the hospital acts as a lighthouse that illuminates the surrounding landscape.

The story continues indoors and incorporates the animals of the island. The emblematic animals have a two-fold function: they give people something pleasant to think about and act as signposts. The building has two large light-filled foyers that are made from glass from floor to ceiling.

“Why does a hospital have to look like a hospital? T3 is revolutionising and breaking boundaries. The new facilities will also make art and culture possible in this space, i.e. the very things that make a place feel comfortable for both the employees and patients,” Aaltonen sums up.