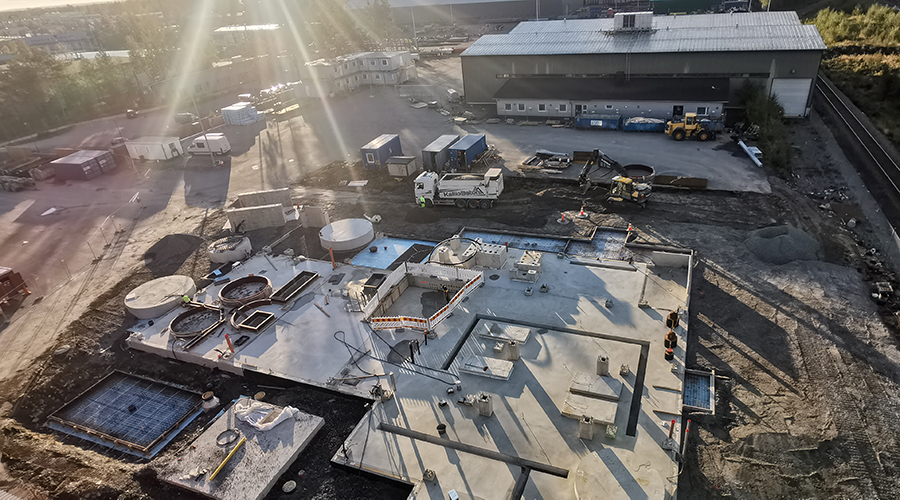 The energy company Seinäjoen Energia is aiming to reach carbon neutrality by 2030. If all works out well, the company will be close to this goal in just a few years. In the future, the city of Seinäjoki will receive its heating from biofuels and recovered waste heat, saying farewell to peat for good.

The city had been deliberating on different power plant solutions for a long time. The city’s district heating was dependent on a single power plant and peat as fuel. Peat has become more and more expensive, which has caused upward pressure on the prices of district heating. This made it necessary to look into new alternatives.

Different kinds of waste incinerators and bigger power plant solutions were compared. In 2018, the decision was made to decentralise production to several smaller facilities instead of one large facility. A biofuel plant that will produce heat for half the city will begin its trial runs in autumn 2022. The plant was funded with MuniFin’s green finance.

“We decided not to put all our eggs in one basket. The new facility will secure the reliable production of renewable energy but will also leave room for other solutions”, says Mikko Mursula, head of district heating unit at Seinäjoen Energia.

The company updated its strategy a year after deciding on the decentralisation of production. This included setting the strategic goal of carbon neutrality by 2030.

“Until then, we did not have any concrete steps laid out ahead besides the new Kapernaum heat plant, nor did we have a clear timetable for the reduction of peat use”, Mursula says.

The fuel used in the new Kapernaum heat plant comes from different kinds of sawmill and forest felling by-products such as tree bark, sawdust and forest chips. What sets the plant aside from the rest is that it can utilise even very moist wood – the wood that is burned can have a moisture content of up to 65 per cent. There is no need to dry out the wood in piles when even freshly felled wood burns efficiently in the incinerators of the facility. The heat from flue gases is also recovered.

“While it’s not a new innovation in the industry, we are implementing flue gas heat recovery for the first time. Using modern technology, our plant now puts out 40-degree flue gas instead of the previous 150 degrees.”

“The new logistics already began to generate savings last summer when we started burning wood instead of peat in the old boiler.”

Heat pumps in a key role

The new heat boiler is not the only thing moving Seinäjoen Energia closer to carbon neutrality. A new auxiliary plant in Hanneksenrinne which uses pellets instead of oil was completed in 2020. In the near future, total investments will reach about EUR 60 million. It is estimated that carbon dioxide emissions will drop from the nearly 660,000 tonnes in 2018 to below 14,000 tonnes by 2023. For customers, the investments mean steadily priced and clean renewable energy.

“We have mapped out the options and aim to increase everything else except combustion-based production. Even CO2-free combustion may be unacceptable in energy production in the future”, Mursula ponders.

A new data centre being built in Seinäjoki will produce about 10 per cent of the city’s district heat supply. This is roughly equivalent to the annual demand of all the city’s single-family houses. If all goes as planned, the data centre can eventually produce heat for one third of Seinäjoki. Seinäjoen Energia has been involved in the project over the last few years.

“The data centre is designed to operate on renewable power. The heat of the data centre is recovered with heat pumps and transferred to the district heating water. Green electricity in, green heat out”, Mursula describes.

Heat pumps have an even bigger role in Seinäjoen Energia’s work towards carbon neutrality. Heat recovery and the more extensive utilisation of waste heat are being canvassed. Wastewater heat recovery could provide as much as 10 per cent of the city’s energy demand in the future. A project by EPV Energy involving the construction of a new district heating battery and electric boiler in connection to the Seinäjoki power plant is due for completion in 2022. EPV also provides wind energy for Seinäjoen Energia.

“The energy sector and the electricity market are undergoing quite an upheaval. Wind energy production is growing. Sometimes there is an oversupply of electricity, sometimes the supply does not meet the demand. On freezing winter days, the energy demand in Seinäjoki can double. The district heating battery enables us to store energy when there is excess supply”, Mursula explains.

“There has been uncertainty regarding the viability of heat pump investments. Investment aid speeds up investments and reduces the related risks. At the moment, investments are very profitable also due to the low interest rates”, Mursula adds.