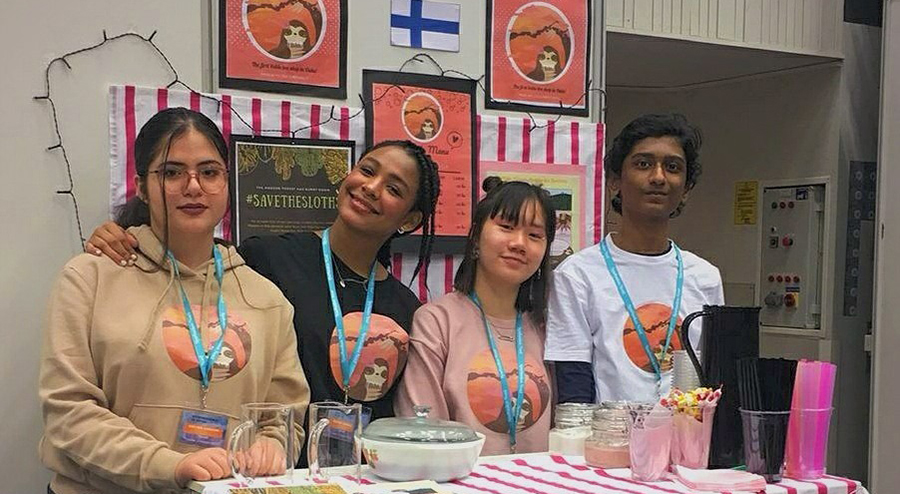 During the 2019–2020 academic year, participants ran mini-companies that operated on real money as part of the JA Company Programme. The programme is carried out as part of the curriculum. In early 2020, more than 450 JA companies and 1,400 students took part in the semi-finals in 14 cities.

Momo’s Bubbles serves Taiwanese bubble tea, a milky tea drink with chewy tapioca pearls. While wildly popular in many countries, bubble tea continues to be an exotic treat in Finland. In Oulu, Momo’s Bubbles is the first company to serve this drink.

A personal and distinctive brand and enthusiastic approach

According to the competition’s jury, made up of JA Finland’s partners, the business idea of Momo’s Bubbles was very topical. The jury was particularly impressed with the company’s strong, authentic and personal brand and the team’s approach to entrepreneurship.

“Momo’s Bubbles was positively bubbling with joy. The team’s energy was infectious, but the customers also praised the actual product, the bubble tea. During the programme, the team worked ambitiously to improve their production process, develop new flavours and offer options to accommodate for people with special diets”, says Kirsi Räbinä, director at MuniFin and jury member at the finals.

“The team members presented themselves very naturally, and their cheerful brand image reflected the team very well. Their business idea has great potential to grow and expand through collaboration agreements or licensing”, said the jury. Although there are a host of chains offering various beverages on the market, the jury was convinced that Momo’s Bubbles would stand out from the competition in a positive manner.

The Momo’s Bubbles logo sports the company mascot, Momo the sloth. The company donates 10% of all sales to charity, using the proceeds to help sloths that were endangered in the 2019 Amazon forest fires.

“The Momo’s Bubbles team is going to go far. They are striving to move forward and are passionate about making their mark on the world”, commends Kirsi Räbinä.

The prize for the MuniFin #Huomisentekijät signature award is a sparring session with Jenny Pitkänen of the YouTube channel Jennysvoices. Pitkänen is a JA alumni whose JA company once made it to the national finals in the Company of the Year Competition.

Because social media has played a vital role in Pitkänen’s career, she will give the winning team tips on how to market their company on social media. The winners can decide together with Pitkänen what other topics the sparring session will cover.