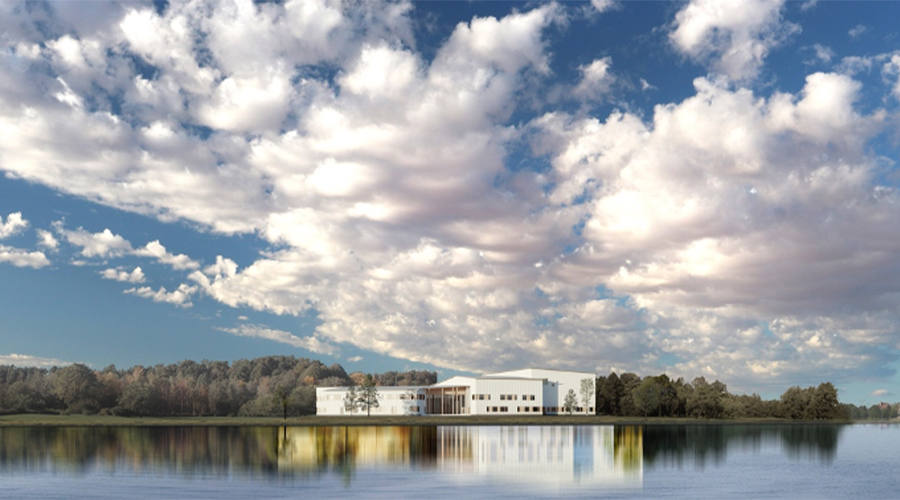 Ivalo’s new education centre is being built amid the rugged landscape along the Ivalo River.

A modern new education centre is being built amid the rugged northern landscape along the Ivalo River. It will cover about 9,000 square metres and provide premises for a total of 500 pupils all the way from pre-schoolers to upper secondary school students.

It will be the largest investment in the municipality’s history to be financed with MuniFin’s green finance. The first discussions about the new school were held in 2017. Construction was launched in late summer 2020, and the plan is to open the school gates to pupils in time for the start of the school year in August 2022.

“These kinds of projects are huge in scale – a lot of time is spent on design and planning. Nothing happens in the blink of an eye, even though we’ve been actively moving forward with the project all the time. Expectations are running high throughout the entire municipality,” says Inari’s Municipal Manager, Toni K. Laine.

The new centre is a firm investment in the future and an important step towards a more modern municipality with better services.

“It’s high time for municipalities to get their schools and other public premises into shape. The Municipality of Inari wants to lead by example. We have a clear programme for renewing our public buildings and this education centre constitutes a significant opening,” says Laine.

He reminds us that many Finnish municipalities were largely built in the 70s and 80s. The building stock is becoming irrevocably outdated.

“In some places, the buildings are even older than this. Something has to be done. However, local authorities also hope that the government will be more involved in funding service investments in the future, at least to some extent. There is definitely plenty to do and build in Finnish municipalities,” says Laine, sending his greetings to the decision-makers.

Flood risk poses its own challenges

As in many other Finnish schools, Ivalo’s old school premises have had problems with indoor air. However, this is not the only reason for building the new education centre.

“Indoor air issues are often triggers that spark a rapid response, but there may be many other factors in the background. One significant factor was the introduction of the new national curriculum, whose pedagogical requirements could simply not be met in the old premises. The current school environment was designed for a completely different curriculum and era. It has fallen behind the times,” says Laine.

Laine says that, even at the project planning stage, there was already a prevailing consensus within the local authority that a new school was required and should be built. The only real discussion centred around the school’s location.

“Ivalo is a very difficult place to build in, as large areas are at risk of flooding. Although we do naturally already have flood protection in place, we must still carefully consider the location of new construction projects.”

The new school will be built on the site of the old elementary school, on the northern side of the river.

“We also wanted the school to be in harmony with the river,” says Laine.

Side by side with Lapland’s nature

Thanks to its energy efficiency, the building was approved for green finance by MuniFin and is currently the northernmost green finance project. Consolidating operations in modern premises will achieve clear cost benefits, while also guaranteeing safe, high-quality and, above all, healthy teaching premises for children and young people.

Lapland’s stunning nature and unique landscapes have been the inspiration for the school’s designers.

“The brief for the architects was to create a style of architecture to suit Lapland in particular, by drawing on local nature and culture. Wood is highly visible as a structural element and glass is a similar element to water, keeping it in harmony with the nearby river.”

As Inari is a multi-lingual municipality, working in small groups was a particular focus.

“In addition to excellent spaces for group work, the centre will also have a first-class auditorium that can also be used as a cinema, as well as a top-notch space for cultural shows and exhibitions. We’ll be getting a new, full-size sports hall and a central kitchen, which will be essential for the local authority’s service provision. Extra Lapland enchantment will be provided by a separate kota – a traditional Sami hut that will be used as both a learning and meeting place,” says Laine.

Laine says that Inari has long been on the winning side when it comes to migration. These investments in education will further increase the area’s appeal.

“The new centre will definitely give our image a big boost. We’ll have the opportunity to show people who are considering moving here that we want to provide safe and healthy premises for children and young people and that we’re strongly invested in pedagogical development and education through physical factors. Future generations will be educated in the new centre. A more important factor is hard to find,”says Laine.

MuniFin’s green bond and leasing are targeted at financing environmentally friendly investments. Customers can apply for green finance for both small and large scale investment projects that will bring clear and measurable pro-environmental effects.

The terms and conditions for green finance are otherwise the same as for MuniFin’s other financing, except that green finance is more affordable for customers than an ordinary loan or leasing agreement.