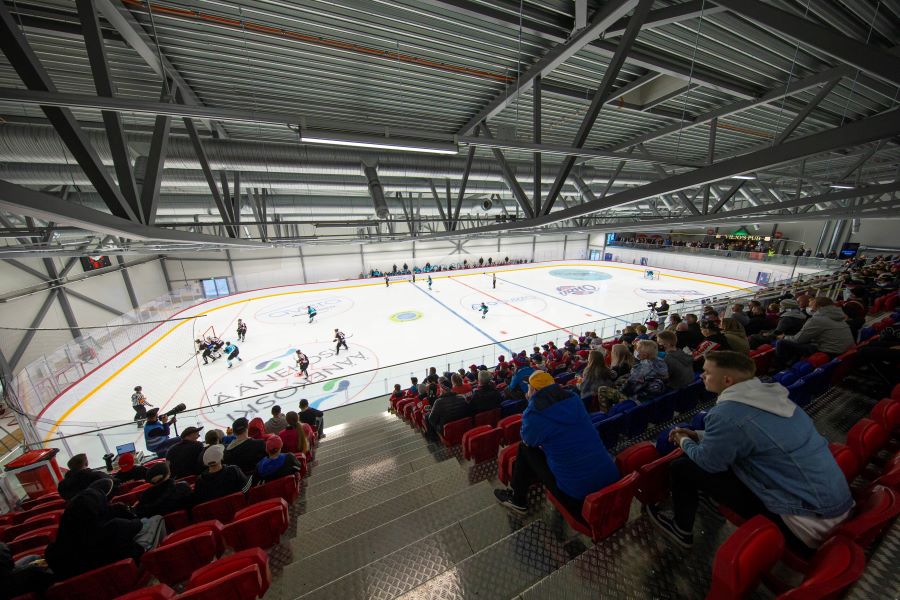 The recently completed Suolahti ice hockey arena in Äänekoski is probably the most energy-efficient one in the world. It is a pioneering project in its field, built with green financing from MuniFin. It generates excess energy which is used to heat the nearby school and swimming hall.

The first puck dropped in the new hockey arena on 28 August. The opening practice match between JYP and Pelicans was sold out in a couple of hours.

“The construction was completed in the planned schedule, and the opening was a success despite the coronavirus situation. The top league match also put the quality of ice to a real test right away”, says Antti Virmanen, CEO at Proavera Ltd.

The Suolahti arena is an eagerly anticipated investment in Äänekoski’s sports scene. The arena replaces a decades-old tarpaulin hall and brings high-quality sports facilities within reach of everyone. The arena in itself is not an unusual structure, as Finns are used to having a hockey venue in every town. Its design, construction and operation are exceptional, however, earning it the nickname of “zero-energy hall”.

“The arena is actually a provider rather than just a consumer of energy. An indoor ice rink is basically a massive refrigerator, which takes an enormous amount of energy to keep cold. But in doing so, it also creates condensing heat similarly to regular fridges. Usually this heat is simply expelled outside, but we store it and make use of it instead”, Virmanen explains.

The idea is as straightforward as it sounds. All of the required technology already existed, although the arena can be described as a pioneering project. “Green” is still not the default standard in new construction projects. The decisive part of the progress made in Äänekoski was a shift in thinking.

”We decided to do things differently. The investment had to be made anyway, so why not make it in a sustainable way? If we look at the obvious solutions critically, and look for ways to improve them, I think that puts us in the right track”, Virmanen notes.

Energy efficiency as a cornerstone of the project may initially sound expensive. An indoor ice rink is a large undertaking for any Finnish municipality even without the new design and construction methods. Virmanen admits that the initial investment was larger compared to a “regular” hall, but only by a relatively small amount – and the finances should be considered far beyond the initial costs.

For a large, long-term project like this, the overall energy economy and operating costs are more significant than the initial design and construction costs. The Suolahti arena creates enough energy for all its own thermal needs with excess to share with others.

”We have aimed to control our energy balance and run the venue with minimal operational economy. We are therefore more than self-sufficient: not just using but also selling our energy. Our waste heat turns into usable heat for the nearby school and swimming hall”, Virmanen says.

The project is financed by a green loan from MuniFin. Green loans can be sought for projects that create substantial and measurable benefits for the environment. The Suolahti arena uses less than half of the energy required for other similar halls. Attention has been given to details as well: the ice resurfacers are electricity-powered, electricity is bought only from renewable sources, and the refrigerant used is carbon dioxide, which is more friendly for the environment than other options. The project has already gone a long way, but new ideas keep appearing in Virmanen’s planner.

”Projects like this require attention to both small and large details. Our next goal is to increase our degree of self-sufficiency. We’ll reduce the amount of purchased electricity by installing solar panels on the roof of the arena”, Virmanen envisions.

The Suolahti Arena measures everything possible. Approximately 1,500 measuring points produce data on things like heat and energy production and transmission. Incoming energy is also measured in many ways so that it can be monitored in the long term.

The Suolahti Arena is the first concrete example of a green ice rink in Finland, and as far as we know, the first one in the world, too. But Äänekoski is by no means the only municipality thinking about energy-efficient ice rinks. Green projects are rapidly gaining popularity.

“I have a feeling that green energy will soon be used all over the country. Almost every time I’m on a hockey trip someone tugs at my sleeve and asks for advice, and I think that’s a great thing. I tell everyone to feel free to copy this design, and improve on it too”, Virmanen notes happily.